Shadows in the Desert: Ancient Persia at War (General Military)

Kaveh Farrokh narrates the history of Persia from before the first empires, through their wars with East and west to the fall of the Sassanians. For the first time, we see a clearly written history book that outlines the relationship between these Iranian achievements to the wars that took place between the Greco-Roman world and ancient Persia This Osprey Publishing effort combines the scholarship of Dr. Edwin Yamauchi's "Persia and the Bible" and Dr.


Lindsay Allen's "The Persian Empire" with a readability accentuated by beautiful maps and photography which bring academic data and precise historical analysis into play with the majestically artistic. Put simply, it is a masterpiece and reference work which will stay on the shelf of the interested generalist and specialized scholar for decades to come.

Indeed, those pursuing degrees associated with these fields may find It on their required reading lists. Qoqnoos Publishing House will be printed the book in the near future. A number of unique illustrations depicting the wars and the structure of the Persian armies will be published in the book, which also includes a foreword by Harvard Professor Emeritus Richard Neslon Frye.

Shadows in the Desert: Ancient Persia at War

He obtained his PhD in from the University of British Columbia, where he specialized on the acquisition of Persian languages. He has given lectures and seminars in the University of British Columbia and has written articles for various journals. He is currently acting as historical advisor on a film project titled Cyrus the Great, and will be appearing in a History Channel documentary on the Persian Empire in October The author lives in Vancouver, Canada. 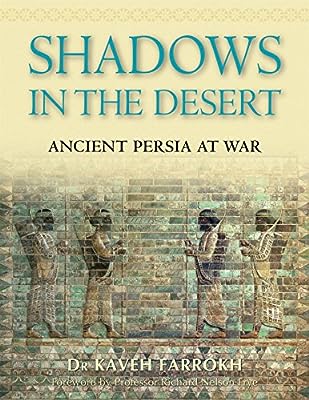 Show More Show Less. By default, it sorts by the number, or alphabetically if there is no number.

If you want to force a particular order, use the character to divide the number and the descriptor. So, " 0 prequel " sorts by 0 under the label "prequel.

Series was designed to cover groups of books generally understood as such see Wikipedia: Book series. Like many concepts in the book world, "series" is a somewhat fluid and contested notion. A good rule of thumb is that series have a conventional name and are intentional creations , on the part of the author or publisher.

For now, avoid forcing the issue with mere "lists" of works possessing an arbitrary shared characteristic, such as relating to a particular place. Avoid series that cross authors, unless the authors were or became aware of the series identification eg.

Also avoid publisher series, unless the publisher has a true monopoly over the "works" in question. So, the Dummies guides are a series of works.

But the Loeb Classical Library is a series of editions, not of works.